Maslow first introduced his concept of a hierarchy of needs in his 1943 paper “A Theory of Human Motivation” and his subsequent book Motivation and Personality. This hierarchy suggests that people are motivated to fulfill basic needs before moving on to other, more advanced needs. 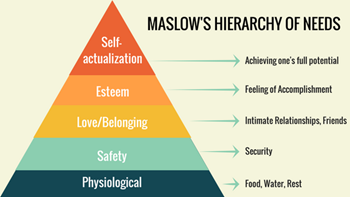 While some of the existing schools of thought at the time (such as psychoanalysis and behaviorism) tended to focus on problematic behaviors, Maslow was much more interested in learning about what makes people happy and the things that they do to achieve that aim.

As a humanist, Maslow believed that people have an inborn desire to be self-actualized, that is, to be all they can be. In order to achieve these ultimate goals, however, a number of more basic needs must be met such as the need for food, safety, love, and self-esteem.

There are five different levels of Maslow’s hierarchy of needs. Let’s take a closer look at Maslow’s needs starting at the lowest level, which are known as physiological needs.

Regarding human needs, one of the most important contributions to psychology is the so-called Maslow pyramid. In it, the author ordered human needs in a hierarchy.

In order to be able to go up steps, it is necessary to satisfy the needs in the previous steps. Our progress will depend on our own actions, on the active attitude we adopt to keep moving forward. How? Through motivation.

Human behavior can be altered if different needs are not met. The lower the step to be satisfied, the more it affects behavior.

Maslow is considered one of the founding fathers of humanistic psychology. This type of psychology explores issues from a philosophical perspective of life in order to answer meaningful questions. It differs greatly from other psychological perspectives, especially behavioral psychology, which only focuses on observable stimuli (like behavior), or from psychoanalysis which focuses on the unconscious.

Maslow believed human needs could be ordered, therefore he created a hierarchy, and with that, a pyramid. Maslow’s pyramid has five levels, the highest level being self-actualization. The way to climb to the top, according to Maslow, is to have an active attitude. Until our basic needs are not met, we can’t climb the next step. We are all responsible for our own progress. Motivation is the key to progressing and moving up.